Fullerenes, a huge family of spherical carbon cage molecules, have attracted considerable attention of the scientific community because of their remarkable properties and potential applications. Since higher fullerenes were discovered, it has been shown that the existence of several structural isomers drastically complicates their investigation as well as their structure determination. A direct method of structure determination such as X-ray crystallography is envisaged to solve the query of single-isomer recognition. The virtually spherical shape of all fullerenes and their rotational mobility in the crystal lattice define the poor quality of fullerene crystals. Derivatization is an efficient approach to solving this problem. In particular, chlorination has emerged as a powerful tool for obtaining well crystallized fullerene derivatives. On the other hand, highly selective chlorination of fullerenes opens new horizonts for subsequent derivatization of fullerenes.

In recent years the fullerene family has been remarkably broadened by the discovery of many non-IPR (Isolated Pentagon Rule) fullerenes obtained by in-situ chlorination during the convenient fullerene synthesis.

The first ordered crystal structure of a derivative of the D2-symmetric C76 fullerene, C76Cl18, is determined. The distorted carbon skeleton of C76Cl18 contains elongated C—C bonds and a unique π system. The C76 cage (green) is surrounded by two helical belts of chlorine atoms (orange).

The discovery and characterization of an elusive C78(5) isomer 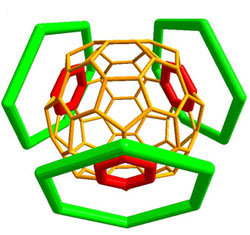 The elusive C78(5) has been synthesized and isolated. Its connectivity pattern was confirmed by a single-crystal X-ray analysis of its chlorinated derivative C78(5)Cl18. The crystal structure also reveals the presence of unusual, short intermolecular chlorine contacts.

The chlorinated fullerenes C78(2)Cl18 and C78(3)Cl18 were synthesized by highly selective chlorination of the individual isomers. They were crystallized as C78(2)Cl18•Br2•TiCl4 and solvent free C78(3)Cl18. The carbon connectivities of both isomers have been confirmed through X-ray single-crystal analysis. Studious investigation of both crystal packings together with the crystal structure of C78(5)Cl18 has revealed the presence of unusually short intermolecular halogen–halogen contacts, which provide evidence for attractive intermolecular interactions, the nature of which is discussed.

"On Selectivity of Higher Fullerene Chlorination." 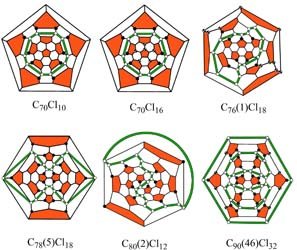 Detailed analysis of chlorinated higher fullerenes has revealed basic principles of halogen addition to fullerenes. The resulting halogenation pattern appears to be controlled by the presence of triple hexagon substructures which trend to generate a new aromatic system during chlorination. 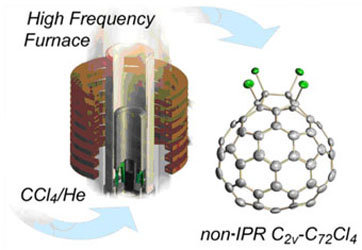 In this work we present the synthesis and isolation of elusive C72 fullerene cage. The C2v-C72 cage has been captured by in situ chlorination forming C72Cl4 whose structure was unambiguously determined by single crystal X-Ray analysis.

"Capturing the most stable C56 fullerene cage by in situ chlorination" 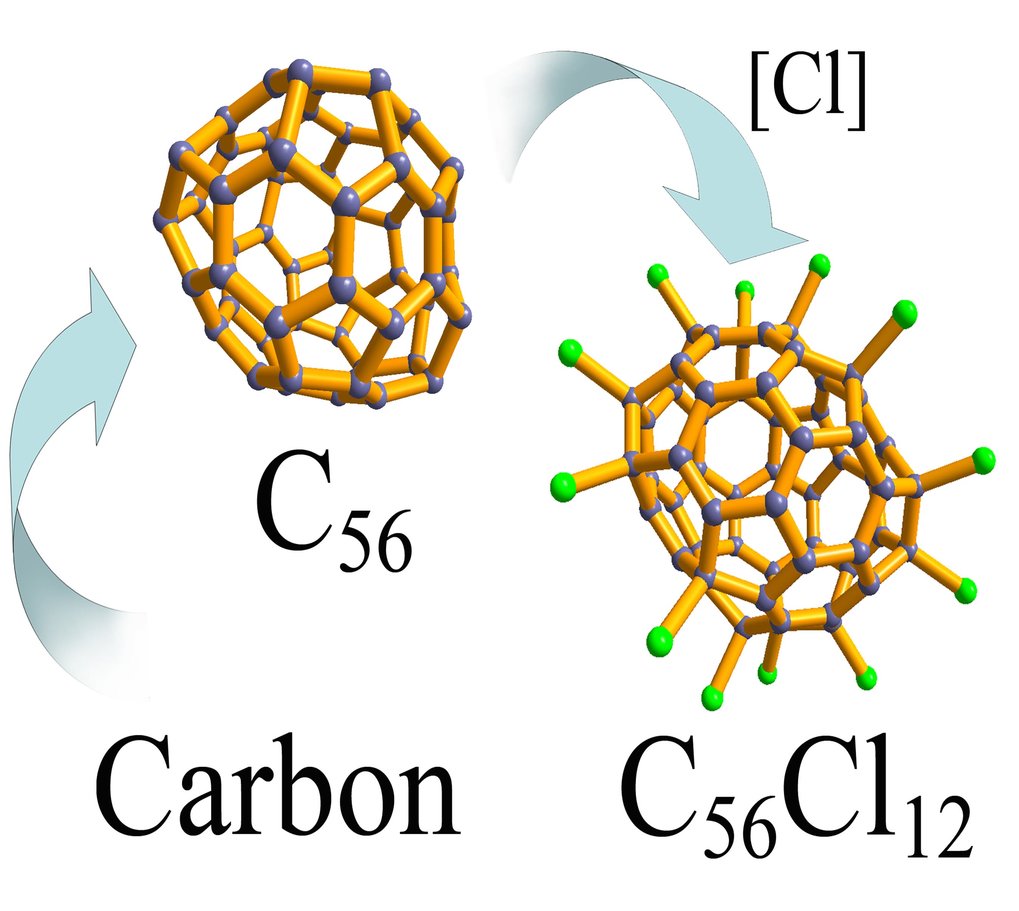 Elusive perchloropyracylene has been obtained during conventional fullerene synthesis in chlorine containing atmosphere. Although the high stability of perchloropyracylene impedes its direct fusion with C60 fullerene, the corresponding adduct has been found in the synthesis products as extracted from the raw soot. Both new species have been separated and unambiguously characterized by single crystal X-Ray analysis.

Capturing of the anti-aromatic #0064C68 carbon cage in the radio-frequency furnace.

The existence of anti-aromatic carbon cages has been experimentally confirmed by capturing of the highly anti-aromatic #6094C68 using in situ chlorination. The structure of the resulting chlorinated derivative C68Cl8 has been unambiguously determined by single-crystal X-ray analysis.