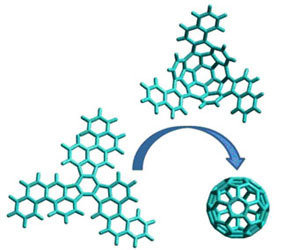 The production of higher fullerenes by the classical method of graphite vaporization encounters problems due to the low yield, non-selective carbon cage formation and associated purification issues. Therefore, synthetic methods are needed that will produce a single isomer of a desired fullerene, free from impurities of other isomers or fullerenes of different sizes. A promising route to achieve this goal for the selective synthesis of fullerenes is based on planar polycyclic aromatic hydrocarbon precursor molecules that already contain the carbon framework required for the formation of the target fullerene cage. Such an unfolded fullerene can be stitched up through the intramolecular cyclodehydrogenation to form the desired fullerene isomer. The direct synthesis approach is not limited by synthesis of fullerenes but can be extended to the synthesis of different carbon based nanostructures including buckybowl, nanotubes and nanoribbons.

A C78 Fullerene Precursor: Toward the Direct Synthesis of Higher Fullerenes 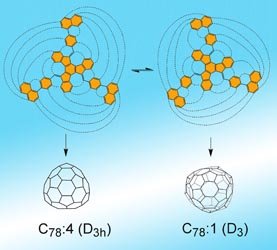 A C78 fullerene related structure (of C78:1 and C78:4, the last undiscovered C78 IPR isomer) has been synthesized and investigated as a pyrolytic precursor. The pyrolysis of precursor containing all 78 carbon atoms in the required positions and 93 of the 117 C—C bonds, needed for fullerene formation, showed selectivity for C78 fullerene formation. In independent experiments it has been shown that the flash pyrolysis of C78 fullerene is not affected by Stone−Wales rearrangement and loss of C2 fragments and, thus, is very promising for the synthesis of individual isomers of higher fullerenes. 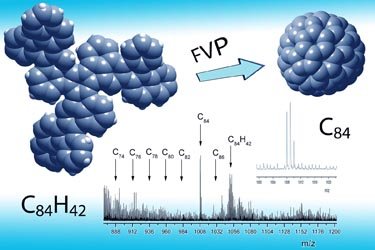 The through-space fluorine activation in the benzo[c]phenanthrene cyclisation process has been examined experimentally and confirmed theoretically. Thermally provoked HF homo-elimination was found to be an efficient approach for selective intramolecular aryl–aryl coupling. The selectivity of the reaction has been found to be more than 97%. The data obtained provide new prospects for the synthesis of non-planar aromatic hydrocarbons and fullerenes employing the flash vacuum pyrolysis technique. 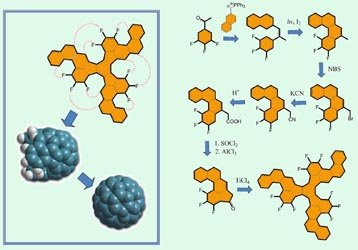 This synthesis path offers a greater control over the fullerene formation process as opposed to the standard methods. Our findings demonstrate that the condensation process by this method is efficient and selective, and therefore opens new horizons in the field of directed synthesis of fullerenes and related structures. As an example, we demonstrate the synthesis of open-cage bucky-bowl and the higher fullerene species C84 in a controlled way. 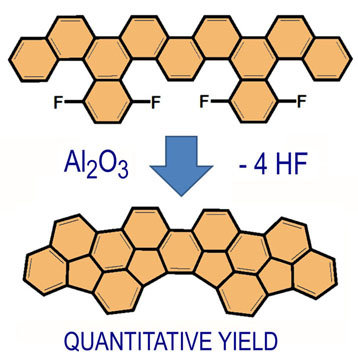 An effective intramolecular Aryl-Aryl coupling is the key step in rational fullerene synthesis and in synthesis of extended bucky-bowl structures. Such a process can be embodied very efficiently through the HF elimination on active Al2O3. The process discovered is characterized by an unprecedentedly high chemoselectivity and regiospecificity.

A strategy for effective intramolecular Aryl-Aryl coupling of fluoroarenes through Al2O3 mediated HF elimination is reported. It is demonstrated that the C-F bond, which is widely believed to be the most passive functionality in organic chemistry, can be reconsidered as a useful functional group allowing very effective C-C bond formation. The solid state strategy presented in this study opens the possibility for facile syntheses of insoluble extended polycyclic aromatic hydrocarbons.