Towards the controlled synthesis of single-walled carbon nanotubes 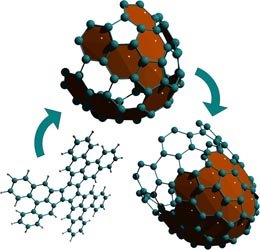 Single-walled carbon nanotubes (SWCNT) exhibit very promising properties for future applications. However, despite considerable advance in growth methods for CNTs it is still not possible to rationally control their diameters and chiralities. According to recent theoretical and experimental work by several groups investigating the very first steps of CNT synthesis, growth of SWCNTs starts by nucleation of an end-cap fragment on the catalyst particle followed by subsequent growth through incorporation of carbon atoms from the metal surface or bulk. Considering this growth mechanism of CNTs, it appears to be attractive to avoid the usual nucleation step of CNTs leading to the formation of an end-cap with accidental geometry by introducing a predefined end-cap molecule the structure of which can be fully controlled. Subsequent growth will lead to the desired SWCNT species as determined by the end-cap geometry. Further, specially designed polyaromatic hydrocarbons can be condensed selectively to the aimed bowl or fullerene structure on catalytically active surfaces. 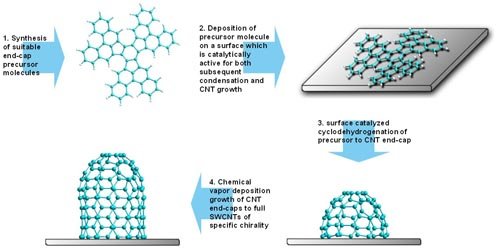 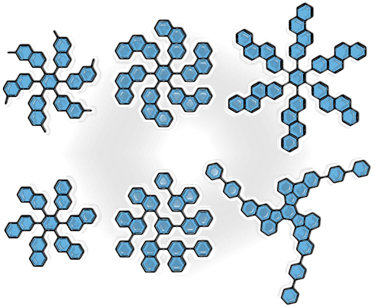 The facile synthesis of six precursor molecules (see figure) for large-diameter hemispherical buckybowls and short carbon nanotubes is presented. The corresponding hemispherical buckybowls represent end-caps of single-walled carbon nanotubes. The molecules are attractive as seeds for fully controlled synthesis of single-chirality CNTs by the root-growth mechanism.