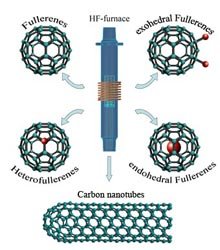 During the last two decades, nanostructures of carbon, among them fullerenes and carbon nanotubes, have attracted keen interest by the scientific community due to their structural richness and potential applications. The high – frequency furnace (HF-furnace) is an alternative synthesis approach which is based on the inductive heating of a graphite body as the carbon source. The possibility of independently co-evaporizing hetero-elements gives access to fullerene species, i.e. barium endohedral fullerenes and phosphor heterofullerenes which are not formed with the alternative methods. Exohedrally chlorinated fullerene species can be obtained directly by evaporating graphite in an atmosphere of carbon tetrachloride. This procedure gives access to new members of the fullerene family not obeying the IPR-rule. Moreover both single- as well as multi-walled carbon nanotubes can be synthesized effectively using the HF-furnace.

Two high frequency induction furnaces as schematized in figure 1 are used in our lab. As susceptor as well as carbon source for fullerene or CNT synthesis, highly pure isostatically pressed graphite in the shape of hollow cylinders is used. The graphite susceptor is surrounded by an outer pyrolytic boron nitride (PBN) and an inner carbon shield. Those serve two purposes, firstly to protect the surrounding quartz tube and secondly to insulate the reaction space around the graphite susceptor from heat loss. The working coils are arranged around the quartz tube and extend above and below the graphite cylinder thus providing a homogeneous magnetic field. The temperature can be monitored at the top of the inner side of the graphite body where the temperature is highest using an optical pyrometer (Dr. G. Maurer GmbH TMRS 485-2-d Infrarot - Strahlungspyrometer). The typical temperature of the carbon body during evaporating conditions is around 2500°C. Catalysts for CNT growth or Heteroelements for the syntheis of endohedral fullerenes are usually placed in a height adjustable graphite crucible in the middle of the graphite susceptor (see figure above). Helium and argon are available as carrier gases with a typical flow of 2600 ml/min. The synthesis pressure for SWCNT growth lies around 690 mbar while 300 mbar are used for fullerene synthesis. 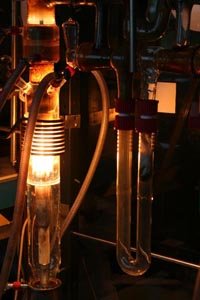 Formation of Fullerenes and Endohedral Metallofullerenes: Preparation in a Radiofrequency Furnace

A thermodynamic analysis of the reaction of formation is presented for C60. The alternative route for the preparation of fullerenes by evaporating carbon in a RF-furnace is described. This process is characterized by its broad variability and by comparatively mild conditions which, in addition, may be measured and controlled rather precisely. Thus, it offers favorite facilities for the production of soots with high contents of fullerenes and endohedral fullerenes.

Synthesis of Single-Walled Carbon Nanotubes in a High Frequency Furnace

An alternative method for the synthesis of single-walled carbon nanotubes (SWCNTs) is presented, which is based on the co-evaporation of a pure graphite body and a metal catalyst (nickel). The graphite body is inductively heated in a high frequency furnace up to ~2400°C. Characterization of the produced soot was performed using SEM, TEM and Raman spectroscopy techniques.

Exohedrally chlorinated fullerenes were synthesized by in-situ chlorination using the high frequency furnace method in the presence of carbon tetrachloride as reaction agent. Besides previously reported chlorinated non - IPR fullerene cages of C2nCl2m (n = 25, 27, 28, 30, 32 and 33, m = 2 – 6) various new higher fullerenes including C2nCl2m with n = 34, 36, 37 and 39 are present in the soot extracts in significant quantities as was found by HPLC/offline mass spectroscopic analysis. A more detailed analysis showed the presence of several species with the same carbon content which could be due to the formation of either different isomers or of different degrees of chlorination. 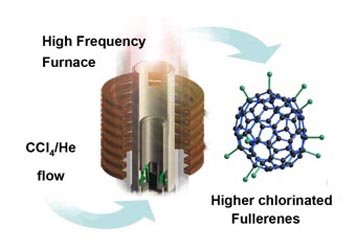